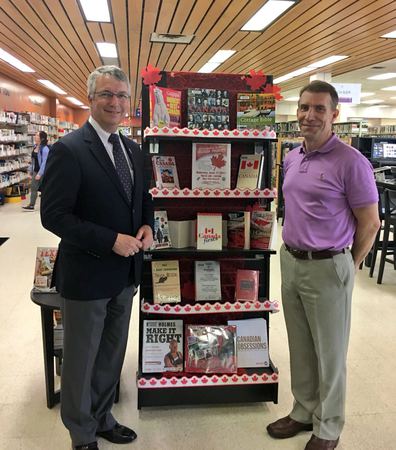 Lloyd Longfield, Member of Parliament for Guelph, on behalf of the Honourable Melanie Joly, Minister of Canadian Heritage, today announced funding of $23,704.00 to the Guelph Civic Museum for their community project Before there was Canada: Time for Truth and Reconciliation to feature cultural displays, and active participation with the indigenous community and funding of $20,000.00 benefitting the Guelph Library for their community project to bring the community together and collect stories to showcase Canada’s diversity. The project features Guelph and Canada in 1867, 1967 and 2017 and will culminate in the production of a video to be unveiled this year

Thanks to this funding, through the Canada 150 fund, we will make 2017 a year that all Canadians will remember through the Government of Canada investments in local, regional and Canada-wide projects.

Canada 150 is the perfect time to highlight what makes communities all across the country so unique, diverse and vibrant.

“In 2017, Canada celebrates the 150th anniversary of Confederation. This is a wonderful opportunity to celebrate all that it means to be Canadian. Our government has created opportunities for Canadians to participate in local, regional, and national celebrations. Communities across the country are proudly taking part in the festivities throughout the year to mark this significant anniversary in Canada’s history. Join the celebrations taking place in your community!”

“It is important to note that Canada is celebrating the past 150 years in which Canada has been founded and grown as a nation. Canada’s 150th marks a small portion of the history of the indigenous people who have been living where we live for thousands of years. Canada’s 150th gives us each a time to reflect on where we have come, but more importantly where we are going together.”