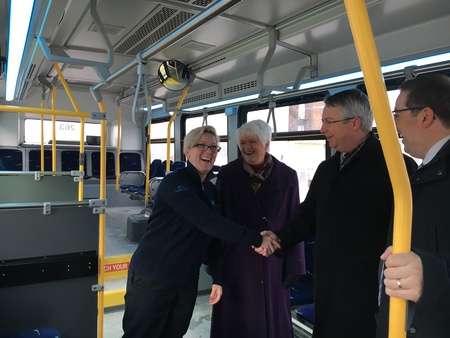 Funding of over $106 million available for local public transit projects

The governments of Canada and Ontario are working together to make long-term infrastructure investments to create economic growth, build inclusive communities and support a low carbon, green economy–leading to a higher quality of life for all Canadians.

On March 14, 2018, the Honourable Amarjeet Sohi, Minister of Infrastructure and Communities, and the Honourable Bob Chiarelli, Ontario Minister of Infrastructure, announced the signing of a bilateral agreement that will provide more than $11.8 billion over the next decade in federal funding dedicated to infrastructure projects under the Investing in Canada plan. The projects supported through this agreement will have a total value of over $31 billion, including $10 billion committed by the Ontario government, municipalities and other partners.

Through this agreement, the Government of Canada will be making unprecedented investments towards infrastructure across Ontario and providing the flexibility for its communities to identify their priorities and projects. These investments will help transform Canada in four priority areas: public transit; green infrastructure; community, culture and recreation infrastructure; and rural and northern community infrastructure.

Under the public transit stream, Guelph will receive up to $58 million from the Government of Canada and up to $48 Million from the Province of Ontario to build new urban transit networks and service extensions that will transform the way Canadians live, move and work.  These investments will make a positive difference in communities, resulting in the better movement of people and goods, providing clean air and water to enabling smarter and more efficient cities.

“Having an unprecedented long term funding commitment gives the City of Guelph a 10 year horizon for planning transit and green infrastructure to help people get to work, shopping or school while at the same time supporting the middle class and promoting environmentally friendly transportation.”

“At its core, infrastructure is about people. Our government understands that Ontario needs high-quality public infrastructure to support a booming economy and a high standard of living. That is why I am pleased that Guelph will receive approximately $48M in provincial public transit funding. This will help improve and maintain the network that people in our community use to get to work in the morning and return home to their loved ones at night.”

“This extraordinary commitment from the Federal and Provincial governments will enable Guelph to transform our transit system, opening up new possibilities for improving service and attracting new riders. With long-term funding, we can do long-term planning to ensure our transit system meets our needs well into the future. This is an exciting day for the City of Guelph.”