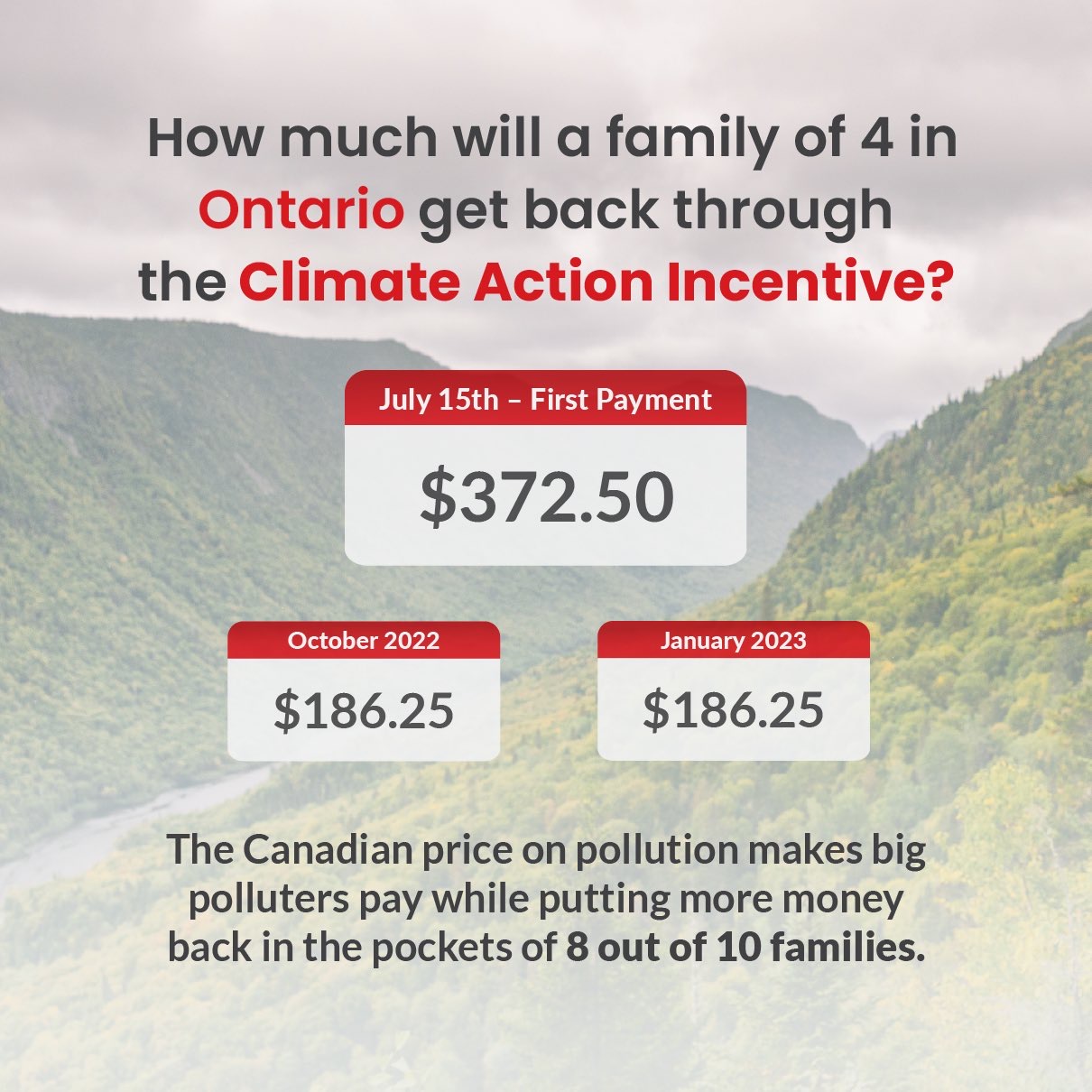 Under the federal pollution pricing system, the government applies a price on pollution in jurisdictions that do not have a system of their own that meets the federal stringency requirements — specifically Ontario, Manitoba, Saskatchewan, and Alberta. In those jurisdictions, approximately 90 per cent of direct proceeds from carbon pollution pricing are returned to residents of those provinces through CAI payments. The other 10 per cent is used to support farmers, small businesses, Indigenous groups, schools, universities, and municipalities. No funds collected are retained by the federal government.

In 2022-23, the increased CAI payments announced today mean a family of four will receive $745 in Ontario, $832 in Manitoba, $1,101 in Saskatchewan, and $1,079 in Alberta. Families in rural and small communities are eligible to receive an extra 10 per cent. Full details on payment amounts for individuals and families in 2022-23 are specified in the backgrounder.

In Budget 2021, the government proposed to change CAI payments from a refundable credit claimed annually on personal income tax returns to quarterly payments made through the benefit system. Starting this July with a “double-up” payment for the first two quarters of the 2022-23 fuel charge year (April-June and July-September), followed by single quarterly payments in October and January, CAI payments will be delivered on this more regular basis.

Even though individuals will no longer receive CAI payments through their tax returns, they still need to file a return to receive the quarterly payments.

“Pollution has a cost, and putting a price on carbon pollution is recognized as one of the most efficient ways to drive down emissions. By maintaining a fair price on pollution across the country, we’re ensuring that pollution pricing remains affordable for Canadians no matter where they live. In provinces without their own pricing system, we’re returning proceeds directly to Canadians and putting a little more money in their pockets.”

“In the provinces where federal fuel charge proceeds are returned directly to households, eight out of ten families actually get more back through Climate Action Incentive rebates than they pay, meaning this system is helping with the cost of living for a majority of Canadian families. Pricing carbon pollution and returning proceeds to Canadian families is an effective and affordable way to combat climate change, while supporting the sustainability of Canadian communities.”

- The Honourable Steven Guilbeault, Minister of Environment and Climate Change