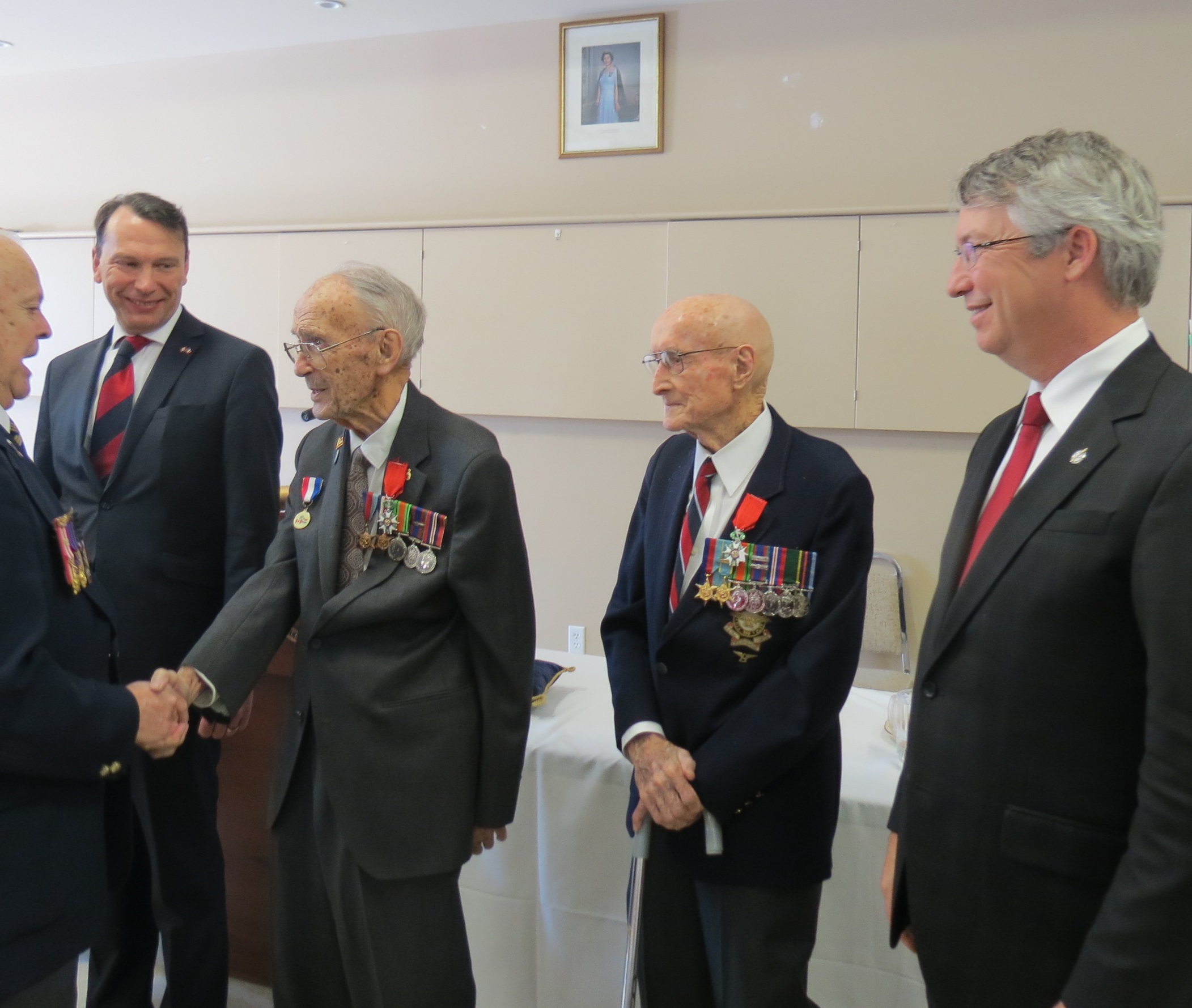 The French Consul General of Toronto, Marc Trouyet was in Guelph today along with MP Lloyd Longfield to recognize local veterans Donald Sutherland and Frank Taylor.

Mr. Donald Sutherland and Mr. Frank Taylor have been awarded the rank of Knight of the French National Order of the Legion of Honour.  This is the highest national order awarded by France and is in recognition of their personal involvement in the liberation of France during World War II.  The honour is awarded to Canadians in gratitude for their courage and bravery in liberating France.

On February 17, 2017 Mr. Taylor and Mr. Sutherland received their medals in an official ceremony with Marc Trouyet, the French Consul General of Toronto.  We are honoured by France’s continued recognition of Canadians that fought alongside the brave people of France to promote our shared values of human rights, good governance, and the rule of law.  Guelph’s Colonel John McCrae has given us a lasting memory of Flanders Fields, and the image of the torch we continue to hold high together.

Victory in the Normandy campaign came at a terrible cost to Canadians, where on Juno Beach on D-Day, three hundred and forty Canadians were killed. Canadian troops would suffer the most casualties of any division in the British Army Group during the Battle of Normandy helping to secure the liberation of France in WWII. Today Mr. Sutherland and Mr. Taylor are recognized for their personal contribution to the war efforts in WWII.

2017 is the 100th Anniversary of the Battle of Vimy Ridge in France during WWI and at this time we also remember those who gave the ultimate sacrifice for our freedom.

The members of the Royal Canadian Legion John McCrae Branch 234, friends and family of Mr. Taylor and Mr. Sutherland, Mayor Cam Guthrie of the City of Guelph, and I personally thank them for their service and sacrifice on behalf of all Canadians et la République française.

I am humbled by the bravery of our nation`s veterans and the lasting recognition that France has accorded to them and in particular to Mr. Sutherland and Mr. Taylor. I am honoured to be a part of today`s ceremony and offer my personal thanks to veterans across our great country who give of themselves to protect our liberties and freedom.

It has been an honour and a privilege to decorate Mr. Donald Sutherland and Mr. Frank Taylor with the Legion of Honour. Their service played an invaluable role in the liberation of France. We will never forget the courage and sacrifice of an entire generation of Canadians, and by decorating Mr. Sutherland and Mr. Taylor, the French Republic is thankful to all those soldiers – those who came back and those who did not. As the commemorations of the 100th anniversary of the battle of Vimy Ridge approaches, I am proud to celebrate the profound friendship that unites our two countries.