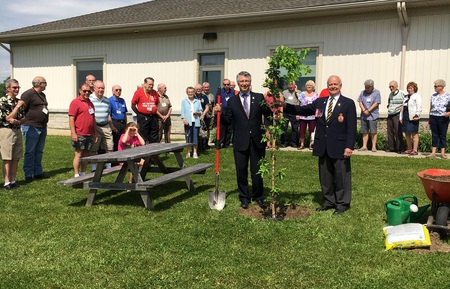 In 2017, as we commemorate 100th anniversary of the Battle of Vimy Ridge, MP Lloyd Longfield is honoured to present a Vimy Oak tree to the Guelph Royal Canadian Legion, Branch 234.

Today with the Legion members and veterans the tree was planted in a special ceremony to honour the Battle of Vimy Ridge and the many Canadians who fought and made the ultimate sacrifice on that battlefield in France.

The Battle of Vimy Ridge in northern France, April 9th to April 12th 1917, is considered to be one of the defining events in the history of our nation. Where Allied troops had struggled and failed, the Canadian troops overcame great odds and eventually captured the Ridge at a cost of some 10,600 casualties. After the battle, Lieutenant Leslie Miller of Scarborough, Ontario serving with the Canadian Expeditionary Force, gathered up a handful of acorns from a partially buried English oak (Quercus robur) on the Ridge. He sent the acorns home to his family with instructions to plant them. In 1919 Lieutenant Miller returned, was given a 25 acre section of his father’s Scarborough farm where he transplanted the oaks along the borders of his woodlot. He named his farm “The Vimy Oaks”.

Today, a number of these majestic oaks are thriving in the same but smaller woodlot under the close care of the Scarborough Chinese Baptist Church that purchased the farm property in 2002.

In January 2014, a group of volunteers, the “Vimy Oaks Legacy Corporation”, decided to repatriate offspring of these descendant oaks back to Vimy Ridge, whose oak trees had all been destroyed in the First World War. These Vimy Oak saplings will be planted in the Vimy Foundation Centennial Park, adjacent to the Canadian National Vimy Memorial site, as part of centennial commemorations in France in 2017 and 2018.

The non-profit Vimy Oaks Legacy Corporation has undertaken to offer Vimy Oak saplings grown in Canada to qualifying organizations and individuals to be planted at commemorative sites throughout Canada to honour the soldiers who fought at Vimy Ridge and other battles during the First World War.

“Guelph has always had a strong connection to our friends in France, who have been so gracious in recognizing Canadians’ efforts to help to liberate their country in World War II.  Guelph’s physician and poet John MacCrae immortalized our connections to Flanders.  Having a Vimy tree at our John MacCrae Legion 234 will serve as a reminder to future generations the ultimate cost Canadians played, but also the hope we share in protecting our shared values”