After Remembrance Day, a community member shared with me a facisinating history of the Guelph Civic War Memorial.  Thank you Mike for sharing this.
I know many Guelphites walk by and drive by the Memorial as it is fixture of our City honouring the sacrifices of Guelphites.
I hope you appreciate the history and significance of the memorial as much as I did. 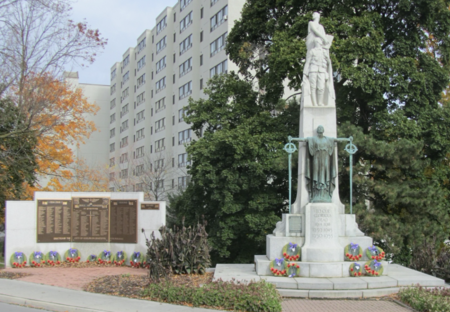 The Committee that erected the Guelph Monument included representatives from the Men’s and Women’s Canadian Club, the Trades and Labour Council, The YMCA and YWCA, the Teacher’s Association, the Foresters, the Rotarians, the Independent Labour Party, the Knights of Columbus and city council. George Drew, who in the 1920s was a war hero, was the committee’s secretary.  Cenotaph design was awarded to British-born Alfred Howell of Toronto.

Cenotaph symbols from the top

The two figures at the top of the cenotaph combine to show the sacrifice and loss of war. The top figure represents the personification of the spirit of Canada. She holds in her arms the roll of those who went to war for her. She is pointing to a name and looking towards the sunset, waiting for her sons and daughters to return home.

This links with the figure of the soldier beneath who represents the fallen Canadian soldier looking towards the dawn. The sun had set for the last time on the young men and women who have fallen, and they look to the dawn of a new life, the promise of life after death conveyed by most religions.
The spirit of Canada and the fallen soldier's eyes never meet. They went to war for Canada which waits their return, but they will never see her again.
The lower figure represents justice and holds two swords in balance, upturned. The two upturned swords are a common theme on many cenotaphs and represent peace. Each sword represents the opposing sides of conflict. The fact they are upturned signifies that these arms are not in conflict but at rest and they are balanced, as each side's soldiers who fought and died each believed in the justness of their cause.

This is to show that it is not our place to judge the fallen of conflict for their beliefs and instead pay reverence to the sacrifice that was paid in establishing the peace we now enjoy. This is further expressed by the laurel wreath on each sword, an expression of victory. The victory wasn't a matter of who was right and who was wrong. The victory was peace itself.

The final item of note on the Cenotaph is the words, "To our glorious dead." This seems to be a unique feature to most Canadian memorials and cenotaphs. We say 'to our glorious dead,' not 'to our victorious dead' as is common with other nations. This serves as a potent reminder that war is a horrid event that results in terrible sacrifice, not glory of victory.

*The research on the Memorial was done by; Dan Bellamy, an Instructor with 121 Air Cadet Squadron.*