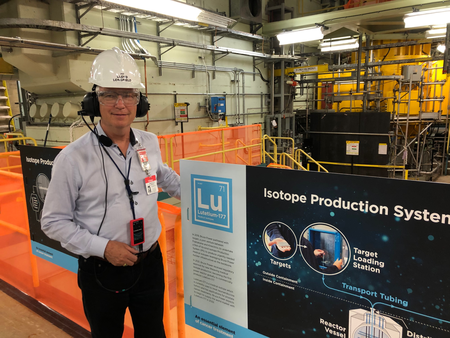 Nuclear energy forms the cornerstone of Ontario’s clean power supply, producing approximately 60% of all electricity in Ontario and fueling Canada’s transition to net-zero. As a key industry stakeholder, Bruce Power is poised to play an important role in significantly reducing Canada’s greenhouse gas emissions. Throughout its decades long history, it has consistently distinguished itself as a world leader in nuclear safety and innovation and is well positioned to continue building on this record well into the future
while providing high-quality jobs across the region.

Looking beyond Bruce Power’s energy production, MPs expressed support for broader nuclear innovation at Bruce Power, including the production of Lutetium-177, a life-saving medical isotope used in the treatment of various cancers. Guelph MP Lloyd Longfield specifically cited the marketing of this product, which is being conducted by Bruce Power in partnership with the Saugeen Ojibway Nation (SON), as a successful model of economic reconciliation that will bring benefit to all parties involved.

This partnership is named “Gamzook’aamin Aakoziwin,” which translates to Fighting Cancer Together, and includes an equity stake for SON and a revenue-sharing program that provides a direct benefit.

The Members of Parliament also discussed Bruce Power’s recent partnership with General Fusion and the Nuclear Innovation Institute to accelerate the delivery of clean nuclear fusion power in Canada and the federal government’s investment of $27 million into the development of small modular reactors in Ontario, which will play a key role in significantly reducing greenhouse gas emissions through various applications.

This visit comes as the Standing Committee on Environment and Sustainable Development has concluded hearings on Nuclear Waste Governance in Canada. The report resulting from this study is expected to be released later this fall.

Following the visit to Bruce Power, MPs will meet with leaders of the Chippewas of Nawash Unceded First Nation on a nation-to-nation basis to discuss reconciliation and community priorities.

Quotes:
“As an international leader in nuclear innovation, Canada is paving the way for economic opportunitiescin the clean energy sector. The partnership with Saugeen Ojibway Nation and Bruce Power creates a meaningful relationship that provide both financial rewards and progress in our long path to reconciliation.”
Lloyd Longfield
Member of Parliament for Guelph

Quick Facts:
• Bruce Power and eSupply, an Indigenous-owned business, have recently signed and memorandum of understanding to explore business opportunities

• Bruce Power is the largest operating nuclear generation facility in the world by both the number of currently operational reactors and total net output capacity, having a total of 8 operational CANDU nuclear reactors with a combined output of 6,550 MWe.

o $69.9 million for Natural Resources Canada to undertake research to minimize waste generated from these reactors; support the creation of a fuel supply chain; strengthen international nuclear cooperation agreements; and enhance domestic safety and security policies and practices; and,

o $50.7 million, and $0.5 million ongoing, for the Canadian Nuclear Safety Commission to build the capacity to regulate small modular reactors and work with international
partners on global regulatory harmonization.

• Budget 2022 includes up to $1.5 billion over seven years, starting in 2023-24, for infrastructure investments that would support the development of the critical minerals supply chains, with a focus on priority deposits, including uranium ores used in nuclear fuel rods.

• Budget 2022 also announces that the Department of Finance will engage with experts to establish an investment tax credit of up to 30 per cent, focused on net-zero technologies, battery storage solutions, and clean hydrogen. The design details of the investment tax credit will be provided in the 2022 fall economic and fiscal update.