Canada Invests $76.6 Million in the University of Guelph to Launch ‘Food From Thought’ 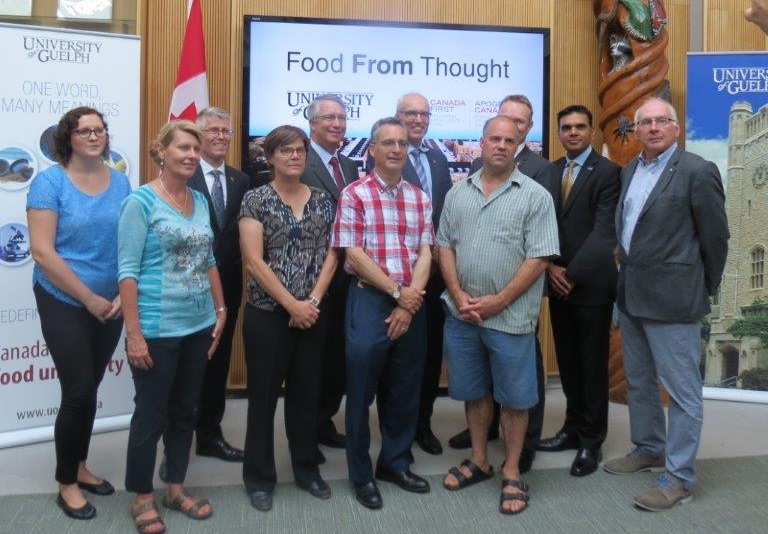 The Government of Canada values the critical role the nation’s post-secondary institutions play in attracting world-class researchers, catalyzing discoveries that improve our health and environment and in contributing to an innovative economy that leads to more opportunities for the middle class and those working hard to join it.

To underscore this commitment, Member of Parliament for Guelph, Lloyd Longfield announced today $76.6 Million on behalf of the Hon. Kirsty Duncan, Minister of Science, from the Canada First Research Excellence Fund (CFREF), which supports world-leading research at universities and colleges. A landmark investment of $900 million to 13 postsecondary institutions through the Canada First Research Excellence Fund has been announced. The Fund strategically invests in areas where Canada’s postsecondary institutions can become global leaders in their respective areas of key research strengths. As part of a national $900 Million investment the government is investing in U of G’s Food From Thought research project, which will use high-tech information systems to help produce enough food for a growing human population while sustaining the Earth’s ecosystems.

This represents the largest single federal research investment in U of G history.

“This will position Canada as a leader in sustainable food production,” said U of G president Dr. Franco Vaccarino, adding “the project will help farmers produce more food on less land using fewer inputs. Our faculty, staff and students will have opportunities to participate in innovative discovery and to play a role in tackling one of the world’s greatest challenges: how to sustainably feed our growing population.”

“The University of Guelph has a long history of collaborating across Canada and globally to contribute to understanding complex challenges. The global food supply will require the University of Guelph’s unique leadership skills that bring together agriculture expertise, big data, environmental science, business and civil society. Today’s funding announcement will give Canada a huge step forward to become a global leader in food.” Lloyd Longfield, Member of Parliament for Guelph

“It is not just how much food we produce but also the way we produce it that will be key in the next century,” said Prof. Malcolm Campbell, vice-president (research), who is the institutional lead for Food from Thought and a plant genomicist in the Department of Molecular and Cellular Biology. “New technology and agricultural practices must enhance biodiversity, produce safe, nutritious food, and improve animal welfare and human health”, he said.

Food From Thought includes partnerships with academic institutions around the globe, numerous government agencies, and industry and innovation centres.

Today’s funding announcement was part of a months-long, $900-million competition involving a review and judging panel of Canadian and international scientific experts. Each of the initiatives was selected for funding following an open competitive process among Canadian post-secondary institutions.