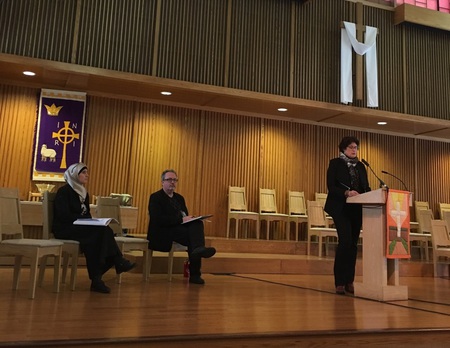 I was very pleased to sit in on the discussion this past Saturday at Harcourt United Church and I thank the Guelph Multifaith Bridging Group for organizing the event. Monia Mazigh presented Syria’s rich cultural history that dates back millennia, and nuances of what is currently happening there against the backdrop of this culture. Haroon Siddiqui presented challenges as he saw them and gave the audience a call to action following the bombing of chemical weapons facilities by the USA, Great Britain and France.

Syrian Canadians have expressed a range of reactions to the recent U.S.-led airstrikes against Syria's government, with some denouncing foreign aggression and others calling for even stronger action to end the conflict that has devastated the country.  Canada continues to offer humanitarian support, including over $290 million to support NGOs, UN partners, and the Red Crescent to deliver lifesaving assistance in Syria, as well as $9 million for the verification, investigation, and fact-finding activities of the Organisation for the Prohibition of Chemical Weapons and the UN.  At the same time, Canada supports the decision by the United States, the United Kingdom, and France to take action to degrade the Assad regime’s ability to launch chemical weapons attacks against its own people.

The situation in Syria is complex, with Russia supporting the government that destabilizes the region, and people trying to rebuild their lives as the conflict continues.  We condemn the Assad regime—and its backers, Russia and Iran—for its‎ repeated violations of human rights and deliberate targeting of civilians. We also continue to support refugees in Canada who are away from their loved ones and will work with our international allies to look for diplomatic ways to bring the conflict to an end, at the same time providing vital support for fact-finding activities and humanitarian efforts in Syria during this very dark period in its several thousand year history.

I would like to thank the local media for covering this past weekend's event. Articles covering the discussion can be found below: