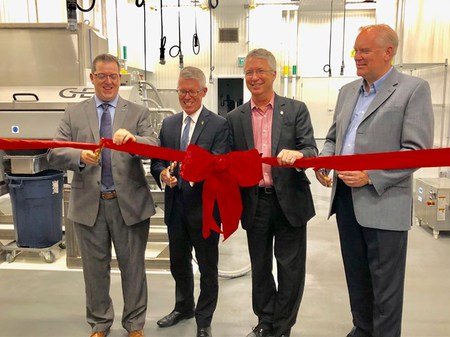 The bioeconomy is an exciting new frontier for Ontario agriculture, opening up new markets for farmers beyond food and feed to a vast array of industrial and consumer applications. Today in Guelph the official grand opening of the new home of Mirexus Biotechnologies Inc. was held.

Member of Parliament Lloyd Longfield (Guelph), was thrilled to attend the official ribbon cutting, today in support of the $1.8 million investment (via Agriculture Canada’s AIP Program) to assist support start-up company Mirexus Biotechnologies Inc. for their equipment and new state of the art headquarters in Guelph which will house their new operations and commercialize a novel nanotechnology platform extracted from Ontario sweet corn.

The patented process technology will help isolates naturally occurring glycogen from sweet corn kernels– which is now used around the world as a moisturizing and anti-aging key ingredient for personal care and cosmetic products – using a Mirexus-patented process. The glycogen product (trade-named PhytoSpherix™) has created an established global demand, with over 95% of the material produced for export. Mirexus Biotechnologies broke ground on Sept. 28, 2017 on their new plant in Guelph which will buy 4,500 more tonnes of corn from Ontario growers over the next 10 years.

Their unique, 100% natural, product was first developed at the University of Guelph by researchers who became founding members of the company and continue to work in research and product development. The company now employs over 25 employees and co-op students who are working to develop applications for their nanotechnology being used in skin care, nutraceuticals and biomedical products.

Quotes
“The Mirexus project is a leading example of innovation in the agriculture sector and a great success story for Guelph, because it helps local farmers while enabling an innovative start- up company to sell cutting-edge bio-products here in Canada and around the world. This investment helps Mirexus establish their new plant right here in Guelph, which is expected to create over 200 well-paying new jobs and buy thousands of tonnes of sweet corn from farmers across Ontario.”
-MP Lloyd Longfield (Guelph)

“The new plant will allow us to produce our unique material for markets around the world, leading to exciting applications in natural cosmetics, high performance nutrition and new human and animal health therapeutics. This investment by Agriculture and Agri-Food Canada, alongside investment from our other partners in the private sector, really sets us on the road to growth and prosperity.”
-Phil Whiting, President & CEO, Mirexus Biotechnologies Inc.