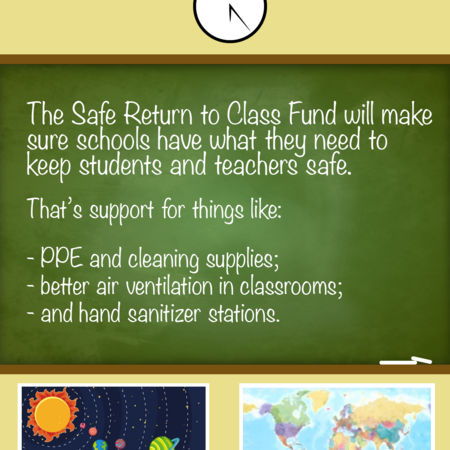 We know the past few months have been especially hard on students who have been physically separated from their friends and classmates, and on parents who have had to juggle work and childcare. Returning to school is an important step to restart our economy and get parents back to work, and we want to ensure they can do so without worrying about the health of their children.

Even though education is traditionally delivered solely by the provincial and territorital governments, we know that the 2020 back to school season is like no other.

That’s why the Safe Return to Class Fund is providing up to $2 billion in support for provinces and territories as they work to ensure the safety of students and staff members throughout the school year. We are also investing an additional $112 million in funding for First Nations to support community measures to ensure a safe return to school on reserves.

A few examples of how this funding might be used include for adapting learning spaces, better air ventilation in classrooms, or for supplying PPE and cleaning supplies.

Provinces and territories have all been working hard to get students, teachers, and staff safely back to school, and we will continue to support them in that work to keep Canadian children and their families safe.

The Safe Return to Class Fund is in addition to the more than $19 billion previously announced for the Safe Restart Agreement to help provinces and territories safely restart their economies. This agreement included funding to increase testing and contact tracing of the virus, support vulnerable Canadians, ensure the availability of safe child care, and provide income support for people who do not have paid sick leave so all Canadians can stay healthy.